The Singpho tribe is the tribe who inhabit parts of India, China and Myanmar. In India Singpho Tribe is located in the state of Arunachal Pradesh in the district of Lohit and Changlang and in Assam. They live in the district of Tinsukia and spread in some other district like Sivasagar, Jorhat and Golaghat. Consist of a population of at least 7,200 in India, usually they live in the villages, namely Bordumsa, Miao, Innao, N-hpum, Namgo, Ketetong, Pangna, Phup, N-htem, Mungong, Kumchai, Pangsun, Hasak, Katha, Bisa, Dibong, Duwarmara, Namo and Namsai, etc. The Singpho are the same people as those called the Kachin in Burma and the Jingpo in China. They speak the Singpho dialect of the Jingpo language.
The Singphos are divided into many numbers of clans, which are known as Gams, generally each under a chief. The main Gams include the Bessa, Duffa, Luttao, Luttora, Tesari, Mirip, Lophae, Lutong and Magrong. The Singpho are also divided into four classes, namely Shangai, Myung, Lubrung and Mirip.

The Singpho people are an ethnic group of people which hae the largest division of the Kachin peoples, that mainly lives in the hills of kachin which is in northern Myanmar’s Kachin State and neighboring Yunnan Province of China and Northeastern India’s Arunachal Pradesh and Assam. However they mostly live in Myanmar, the Kachin who are called the Jingpo in China and Singpho in India. The greater name for all the Kachin peoples in their own Jingpho language is the Jinghpaw Wunpawng.
The Kachin people are also traditional people of several tribal groups, which are known for their aggressive freedom, disciplined fighting abilities, simple clan inter-relations, craftsmanship, herbal healing and jungle survival skills. Other neighboring people of Kachin State include the Shans (Thai/Lao related), the Lisus, the Rawangs, the Nagas, and the Burmans, the last forming the largest traditional group in Burma, also called Bamar.

Singpho Cuisine is a traditional food which is originated from the Kachin land, and that contains northern areas of Myanmar, as well as parts of China and Arunachal Pradesh, connected with Kachin. Outside of Kachinland, Kachin which have many restaurants that have opened in Yangon and Kachin migrants that played important role in having brought the cuisine to other countries.
Shat Jam is a rice dish made from boiled rice, beans, carrots, mushrooms, and fried onions. Sometimes also includes meat such as chicken, pork or beef. This is also known as Kachin⦁ Danbauk in Burmese speaking areas.
⦁ Shan Hkak is a traditional food that contains ⦁ minced beef mixed with ⦁ basil, ⦁ garlic, ginger, chilies and pepper.
⦁ Japhtu is also one of the traditional foods which are a spicy side dish made of pounded chilies and garlic. There are many process such as adding dried beef, fish, banana bud, or tomatoes.
⦁ Si Pa a traditional curry made with rice powder. Vegetables included are pumpkin, pumpkin leaf, mustard, mushroom, okra, long beans, cauliflower, chying lap.
⦁ Silu is also a traditional food which is a curry that contains rice powder and chicken, chilly, basil, garlic and machyang si.

The main religion followed by Singpho Tribe of Arunachal Pradesh is Buddhisim although the Kachins (Jinghpaws) in Myanmar (Burma) are 99% Christians. Before Buddhism nature worship was commonly followed by singpho tribe in India and all the ancestors of the Singpho or Jinghpaws worshiped spirits or gods, and this is believed to be named Madai. Singpho nature worshippers believe that spirits lives everywhere, from the sun to the animals, to and that the spirits bring good or bad luck. Singpho people strongly believe that all living creatures have souls. Singpho peoples practice the ritual out for protection of ones life in daily activities like planting of crops to combat.

Singpho people also practices shifting cultivation (Jhum) like any hill people however it is not regularly practiced, because they are more involved in practicing the plantation of tea. In early 80’s when British tried to introduce Chinese tea plants for cultivation in Assam to these Singpho people the British were shockingly unsuccessful, they discovered that the Singpho people cultivated tea. However later on the British was involved in hybridizing the Singpho and Chinese strains, and using Chinese tea cultivation techniques, the beginning of large-scale tea cultivation in Assam was flourished and laid. The Singpho people has a unique process to produce their tea that is by plucking the tender leaves and drying them in the sun and exposing to the night dew for three days and nights. After three days and nights the leaves are then placed in the hollow tube of a bamboo, and the cylinder by which the leaves would be exposed to the smoke of the fire. By this unique process, their tea can be stored for years without losing its flavour.

Men
The Singpho men make their shields from buffalo’s leather and most of the shields can be as long as four feet. They are also involved in making helmets from either buffalo’s leather or rattan-work, wiped with black color and decorated with the boar’s tusks. Men of Singpo tribe tie their hair in a large knot on the crown of the head. The men also often wear a white shirt with colorful Lungi, and covering their heads with turbans.
Women
The women tie their hair by assembling into a wide knot on the crown of the head, tying it by silver bodkins, chains and ornaments, which are similar to the architecture of the modern skyscrapers. The young ladies tie their hairs into a roll and keep it tied just above the nape. Singpho Women often wear the black jackets with silver decorations during festival known as Munao Poi. This dress are one of the most beautiful and attractive dress in Northeast India. They also wear wool skirts made in bright red colors.

THE SHERPA TRIBE
Next
THE TIWA TRIBE 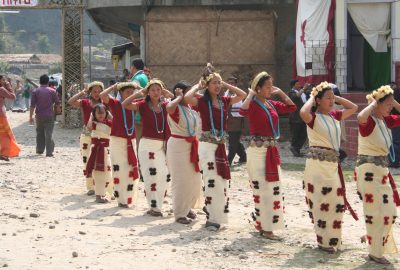 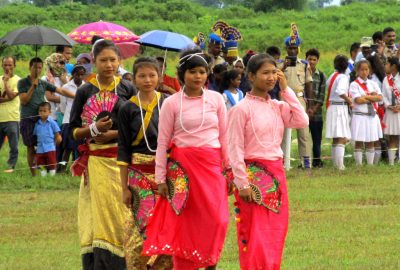 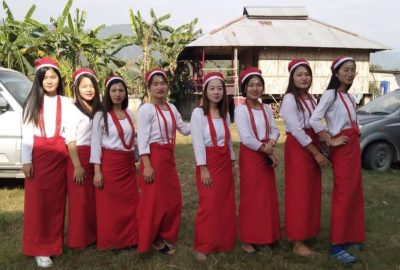 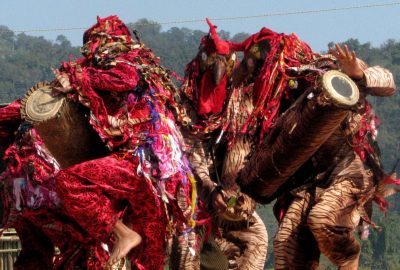