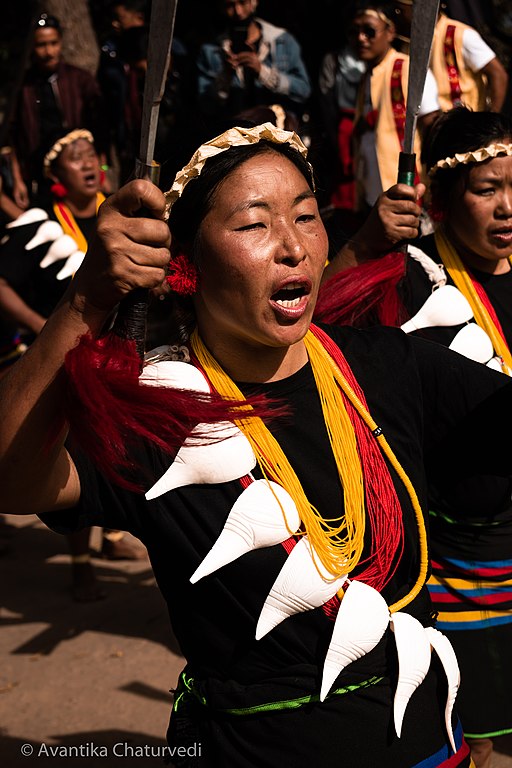 The Chakhesangs are a major indigenous group found in the state of Nagaland, India. Chakhesangs were the previous Eastern Angamis. Chakhesang is now recognized as a separate tribe. The tribe is mostly divided into two groups known as Chokri and Khezha. The name “Chakhesang” was derived from the names of three tribes: the Chokri, Khezha and Sangtam.  Most of the villages of this tribe fall within Phek district of Nagaland,  there are Two Chakhesang villages, Jessami and Soraphung/Krowemi which are located in the Ukhrul district of Manipur, India.

Chakhesang is one of the biggest tribes of Nagas, which is known as “Eastern Angamis” they are known as Eastern Angamis because they were separated from the Angami tribe and were involved in settling in the eastern part. Chakhesang name is a combination of three major sub-tribes, namely chokri, khezha and sangtam. The Cha-Khe-Sanh represent Chokri, Kheza and Sangtam. With time there were many changes inside the tribe itself and apart from other tribes the Sangatams got separated from the tribe but it didn’t disturb the original acronym Chakhesang. Along with these three major sub tribe there are some smaller communities like Poumai (Sapuh) mostly settling in four villages under Razeba Range and in Pfutsero town, Sumi village in Chizami area, Rengmas and Pochuris Melluri area and some Tangkhul families as in Jessami area. Therefore, Chakhesang is a collection of Kheza, Chokri, Poumai, Sumi, Tangkhul, Pochuri and Rengmas.Chakhesang is recognized as a unique tribe among the Naga family. The uniqueness of this tribe comes from the geographical location. The tribe is distributed in Pfutsero, Chozuba and Phek subdivision of Phek, which has its border with the land of  Mao

THE CHAKHESANG TRIBE OF NAGALAND

The Chkhesang is a diverse tribe which speaks different dialects. They usually use Angami’s Tenyidie, Chokri and Kheza as major dialects in conversation, but many Chakhesangs are familiar with Poumai and Mao dialect too. Whereas others are comfortable with the dialect of Sumis, Rengmas and Tangkhuls. With all these advantages, this tribe has rich traditions, culture, folklore, songs and other traditional practices. Traditional livelihood systems of Chakhesangs are also diverse in their composition, dialect and culture. Some of the livelihoods options followed by them are being elaborated for better understanding of the tribe.

RELIGION AND FESTIVAL OF CHAKHESANG

The Chakhesang Tribe follows Christianity as their main religion and adhere Abrahmic teachings and also follows Jesus of Nazareth. Suhkuruhnye is the most important festival of chakhesang Naga and is celebrated on 15th of January. During these festival the boys and girls are purified through religious ceremonies and rituals. The Suhkuruhnye is celebrated for 11 days starting from “Nyede”. The first day of the festivity period is known as “Cedu”. During the festival animals are killed and the blood of the killed animals are sprinkled on main posts of the house. The first made out Suhkuruhnye wine is offered to the gods in banana leaves tumblers and the cooked meat and rice beer are offered to the High-Priest of the village for blessings. The second day is “suh kruh” in where only men are involved in performing their folk. The “suhkruh” means purifications of young, innocent and unspoiled boys for the ritualistic ceremony. To perform this ritualistic ceremony everything is compulsory to use new things such as utensils and fire places. The men usually are involved in going to the well early morning before any animal or bird touches the water and takes a fresh water bath immediately after the first crow of cock because it indicates the breaking of a new day, these is done in order to purify themselves. After that, the unpolluted water is considered to be holy and is brought back to the home, fire is made out of the fire making method and the perfect cock is killed and cooked with the holy water and the cock is eaten to purify the boys for the rest of their lives. Even when a new house is constructed “Suhkruh” is performed in order to get his house for purification this whole process is called “Suhkruh” and “NYE” is known is festival. With the coming of Christianity, SUHKRU NYE’s religious and traditional ceremonies are no longer in practice in most of the villages. However, Suhkruhnye is still celebrated with great importance and enthusiasm mostly by the chokris in Phek district. During this traditional festival the original traditional games, folk songs, folkdance and sports fully occupy the festive period of six days starting from January 15th In keeping with the Christian spirit. Suhkruhnye being a festival of blessings and purification, it is also marked as children’s day. Water Baptism mainly takes place on this occasion.

Hunting plays a vital role in the traditional and cultural importance of Chakhesang. Now hunting of animals is prohibited in the state but during the olden days, hunters would be having a very high social status. If a hunter killed a tiger he was entitled to wear the distinctive ‘luza’ (a special headgear), while one who kills a wild boar was entitled to wear a ‘menipfu’(necklace of its incisors around his neck). The Children of Chakhesang were taught hunting skills from a very early age of their life. Even their festivals are also related to hunting practices. The Shukrunye is an important festival, which is celebrated in the month of January. During this festival entire men folk go in the jungle to catch the birds, the sukrunye is called chedi and on this day where people go for hunting of animals. As hunting is banned now the reared animals are sacrificed during the festival.

(ubiemhatho):  Nagaland as a  whole, is  vibrant

Chakhsang is blessed with a rich architectural wood craft tradition. People are involved in creating magnificent and beautiful wood-carved building fronts and village gates with the help of mithun horns and heads with their vast visual charm. The mithun head with horns are the most powerful wood-carved elements, especially among the Angami and Chakhesang tribes. This tradition could also be liked with the fact that the region occupies a large area  under forest, where good  quality  wood, bamboo  and cane are  abundant and  people  were living in the forest.

Yezu mi, Runguzu and Kholazumi are the Chakhesang pottery villages, where the women folk are involved in the making of good quality clay pots. Making pottery was common during olden days because earthen pots were mostly and commonly used in the kitchen for cooking and storing the food items, but now finding the earthen pots are rare.

The Chakhesang society believes it is only women’s job. Weaving is done mostly on days when women are off from working in the fields. They sit comfortably on their looms for long hours weaving the stretched wool.  The end products of the wool are shawl, mekhala, chaders, etc. It is made for the family members or is also sold in the local market. People like to give hand-spun woven shawls or wrappers during special occasions such as weddings to close friends, relatives and guests.

Chakhesang and Angamies are famous for and considered to be the best terrace makers. The skill is being passed from generations to the family. They carved out beautiful terraces with their hands and also using small tools on hillsides, Paddy is mostly commonly cultivated on these beautiful terraces. Other than paddy they also grow; maize, beans, etc. The fields are irrigated by a network of water channels. Normally, the terrace is proceeding in such a way that water flows down usefully from one terrace to the other below it.

The food of Chakhesang is known for its variety and simplicity. Being one of the ethnic tribes in Nagaland, it is an important tourist site for its beautiful scenery and most importantly food. Naga food is considered spicy due to their love for the most famous king chilly (known as raja mircha in the North East).

Axone (also known as akhuni) is used by almost every household in Chakhesang because of its flavor and the unforgettable taste in the mouth. Axone comes in powdered form and in cake form. There are many uses for these fermented soybeans; some important and popular ones are used mainly with vegetables for making stew and most importantly used to make chutney. Every household’s favourite dishes with Axone are: Smoked pork in Axone, Dried river fish with Axone, Dried beef with Axone

Anishi, a name which is referred to as colocasia (also known as Arbi in Hindi) is also an important ingredient as well. Whereas stems and leaves of anishi are also used to make various stews and for adding extra flavor. It is best when cooked with either fresh pork or smoked pork.

According to the Chakhesang custom, this shawl is worn only by men of the high class or those who have done something honorable for the society like holding feasts for the entire village Chakhesang girls wearing tiza tida.  Tiza is the carnelian bead which makes up the central part of a Tida, a necklace worn by the women of most Naga tribes. It is a broad, heavy, delicate and beautiful jewelry made up of carnelians, agate, ivory, glass beads etc, laced together in specific patterns. Traditionally, a Tiza is a girl’s prized possession. On attaining puberty, it is gifted to the daughters by their mothers. The number of strands and quality of the Tiza denotes wealth and status. 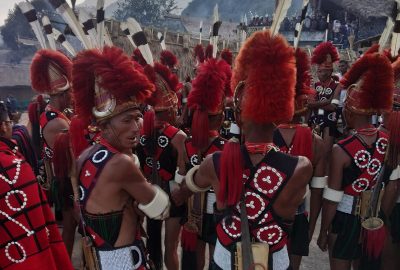 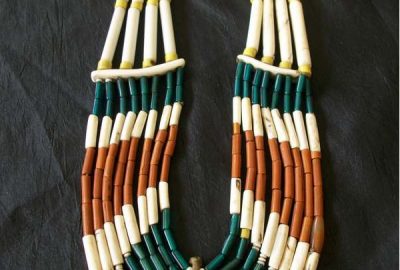 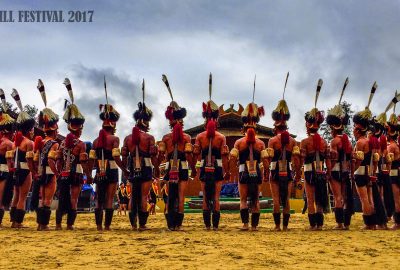 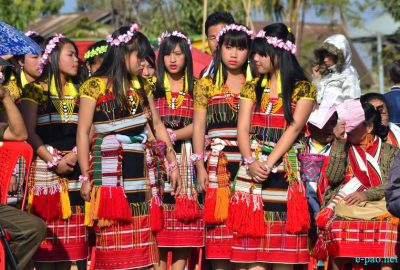 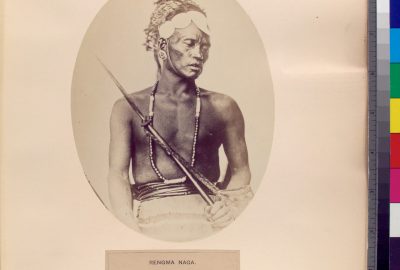